Come along and see all the running and static Cold War Jets at our next Open Day.  Victor K2 XM715 Teasin’ Tina is scheduled to demonstrate a fast taxy run.  The crew will be on hand to provide in depth descriptions of the roles and history of our well maintained aircraft.  See you there!!!! 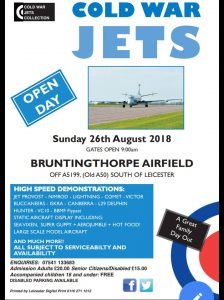 The weather was mostly kind on the day after a tremendous thunderstorm during the night.  All display and static aircraft were positioned at the Gilden end of the runway on Saturday, the Victor in position by 6.30.  A lot of hard work had gone into rectification of the AAPP thanks to Terry and Frank.  The team prepped the aircraft beautifully and all set for Sunday.  715 was the final runner bringing a successful show to its end.  The crowds were treated to a figure of eight followed by a full power run.  During the figure of 8, Bob succeeded in rearranging a series of runway bollards into the trees- sorry Dave.  Due to the move to the other end of the runway, power had to come off earlier than we all would have liked but hopefully the earth moved for the crowd.  The move to the other end of the runway provided the camera enthusiasts with a different backdrop of trees and we include some shots from a first timer, Louise Manson.  Well done Louise and thanks for letting us use them.  It was good to return to have the crowd around the aircraft all day as Bruntingthorpe is unique in this closeness with the aircraft, crews and hot exhausts.  Now roll on August 26th – see you there.