It had been a long and hard year 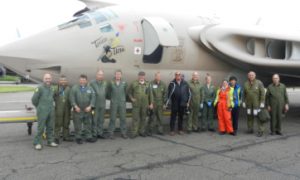 of maintenance for Tina and her engineering team, starting soon after the August 2014 Open Day. No 2 engine was removed to replace all 10 fuel delivery nozzles spaced around the engine. Over time, the pin hole orifices in each nozzle had become increasingly blocked reducing fuel flow to the engine on start up. This resulted in high EGT before the engine became self sustaining and subsequent close down to prevent damage. Fortunately, the fuel nozzles inside the VC-10K Conway 310 engine could be used in the Victor – and a ready supply was at hand.

By the end of April No 2 engine was installed and initial ground runs up to 70% were encouraging. An anti-det run was scheduled on the runway in early May to test Tina’s long dormant systems and apply more power to No 2 engine. The aircraft systems were checked but full power checks were not possible as Tina developed a CSDU oil leak and was towed back to dispersal for rectification.Time had run out- so it was all or nothing for the Open Day!

Saturday 23rd May was the last chance to test Tina before the event on the 24th May. The engineering team prepped the aircraft all morning and Tina was towed out onto the taxiway at 4pm for a full rehearsal. No 2 engine behaved perfectly- a great testament to the skill and dedication of the 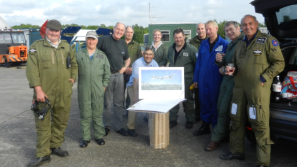 engineering team. All systems were exercised after start and on the taxy to the runway- all working well. Unfortunately we were beaten onto the runway by a Buccaneer which then blew a tyre partially blocking one half of the runway. The aborted take off run was not possible but No 2 engine was taken up to 90% and all indications were normal- excellent. Tina was then taxied to the threshold and pushed back into position for turn the next day. 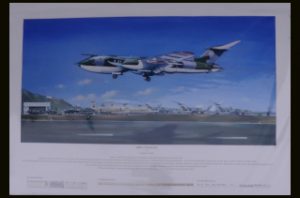 After the anti-det run the team gathered for some light refreshment whilst the aircrew signed the first 20 prints of Jon Westwood’s painting of XL189 ‘Home at Last’ for sale at the Open Day and subsequently online to help keep Tina running.

The Open Day dawned with blustery wet weather, forecast for most of the morning. After the Nimrod run Tina’s engineering team started prepping, oils, pressures and checking the engine intakes for foreign objects. They were satisfied that Tina was ready and at 1.30 the aircraft was towed on to the runway threshold. Power was connected and the AAPP started to provide the air to start the serviceable engines. All was good and about 2pm the aircraft moved forward for the brake and nose wheel steering test. The crew were satisfied all was good and briefed for the run with an abort speed of 90 knots. The power was gently increased and kept symmetrical with a lot of coaxing. At 88% power, the brakes were released and Tina started accelerating down the runway.

The engines continued to power up to 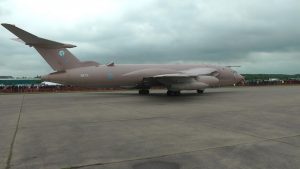 maximum, noting that No 2 engine reached 98% – wonderful. At 90 knots, the throttles were closed, airbrakes extended and the brake parachute streamed. Everything worked perfectly and as the aircraft slowed, the brake chute was jettisoned near the recovery vehicle. Tina cruised past the fast turn off, backtracked the runway and taxied back towards the dispersal. Brendon was on hand to indicate the shut down point and the run was over.

Just time to climb out, congratulate the ground crew on a well prepared aircraft and pose for some photos to celebrate the day.