One of Teasin’ Tina’s stalwart engineers and an 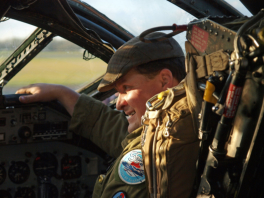 aviation historian, Brendon Johnston, had a big idea in 2014 – he wanted to commemorate what he considered to be an outstanding aviation feat. Aviation enthusiasts were well aware of the Vulcan bombing mission in the Falklands War, Black Buck 1, recorded in Rowland White’s excellent book “Vulcan 607” and subsequent TV documentaries. However, the work horses, the Victor Tanker Force, remained mainly in the shadows. Brendon considered that the tanker efforts in that first Black Buck mission on the 30th April/1st May 1982 should be recognized by a painting of the return to Wideawake Airfield of the sortie flown by Bob Tuxford’s crew in XL189.

He commissioned the renown aviation artist, Jon Westwood, (WestyArt) a member of the Canberra engineering team at Bruntingthorpe, to capture the return of XL189 to Wideawake Airfield, Ascension Island after its long 14 hour 5 minute refuelling sortie. 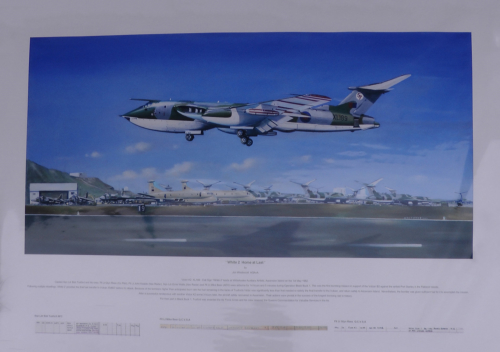 Westy has produced a superb canvas capturing the overflowing parking ramp of Wideawake as the backdrop to XL189’s approach. The ramp clearly indicates the various operational missions being planned but wholly reliant of tanker availability. The actual flying log books entries of the surviving crew members for the mission will be added to the print with the following short history:

Victor K2 XL189 – call sign “White Two” – lands at Wideawake Auxiliary Airfield, Ascension Island on the 1st May 1982. Captain Sqn Ldr Bob Tuxford and his crew, Flt Lt Glyn Rees (Copilot), Flt Lt John Keable (Nav Radar), Sqn Ldr Ernie Wallis (Nav Radar) and Flt Lt Mike Beer AEO were airborne for 14 Hours and 5 Minutes during Operation Black Buck 1. This was the first bombing mission in support of the Vulcan B2 against the airfield Port Stanley in the Falkland Islands. Following multiple refuellings, White 2 provided the final fuel transfer to Vulcan XM607 before its attack. Because of the bomber’s higher than anticipated burn rate, the fuel remaining in the tanks of Tuxford’s Victor was significantly less than that needed to satisfy the final transfer to the Vulcan, and return safely to Ascension Island. Nevertheless, the bomber was given sufficient fuel for it to accomplish the mission. After a successful rendezvous and refuelling with another Victor K2 some 3 hours later, the aircraft safely recovered to Ascension. Their actions were pivotal in the success of the longest bombing raid in history. For their part in Black Buck 1, Tuxford was awarded the Air Force Cross and his crew received the Queen’s Commendation for Valuable Services in the air.

The progress of the painting was kept under wraps as it was Brendon’s wish to present the finished article to the crew in front of Teasin’ Tina and the engineering team. As it happened the painting was finished in time to coincide with the anti-det run scheduled for 3rd May. After a lengthy search, contact was established with the Copilot of the mission, Glyn Rees and Brendon planned a Black Buck re-enactment whereby Tuxford, Rees and Beer would be the anti-det crew to taxi Teasin’ Tina on 3rd May- some 33 years after the event. 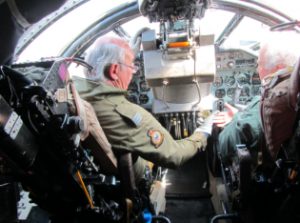 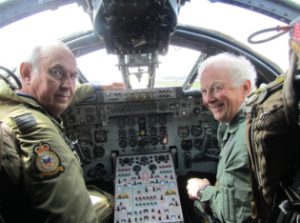 Brendon is extremely pleased with the result, especially as Bob Tuxford was taken completely by surprise. 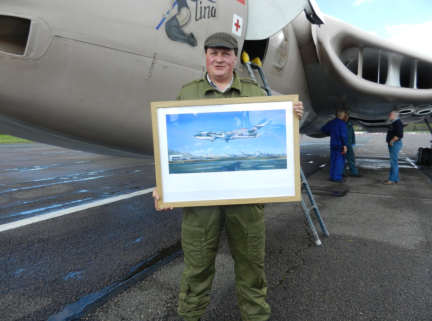 The flight crew were equally impressed. 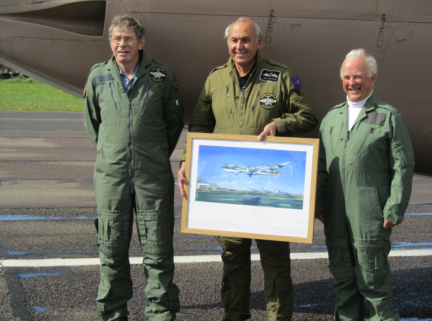 It was also an opportunity to capture a group photo of the engineering support team of Teasin’ Tina who have worked incredibly hard over the winter to solve a wide variety of problems associated with an ageing lady. 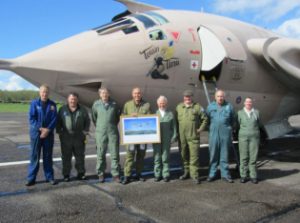 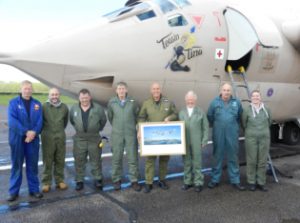 It is intended to produce a limited series of prints numbered and signed by the surviving crew members for sale to create a fund to keep Teasin’ Tina in a safe taxiing condition for the enjoyment of us all.
© Volunteers and Friends of Victor XM715