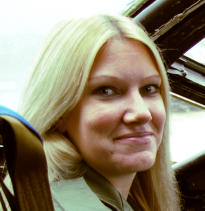 Amanda first realised her interest in aviation when she went to her first air show at RAF Cosford in 2009. She says that experiencing the thrill of the impressive displays, jet noise and the atmosphere sparked an interest and since then, she has enjoyed numerous air displays all over the country, her favourite being RAF Leuchars. She has a fondness for all jets especially the Harrier, Victor and Vulcan. She also harbours a secret liking of Chinooks and Apaches. One Bank Holiday Sunday, following a day of impressive high speed taxi runs at Bruntingthorpe airfield, an announcement was 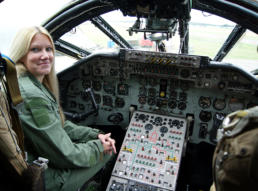 made that if any people wished to volunteer to help look after the aircraft they should give their details to Geoffrey Pool. With an opportunity too good to miss, Amanda and her husband put their names down and have never looked back. “I couldn’t think of a better way to spend Sundays than helping to look after Teasin Tina and helping out with any of the other Cold War Jets”. Amanda is married to David, a Transport Manager who she married in Austria and they live in Staffordshire. Amanda thoroughly enjoys her job as a Medical 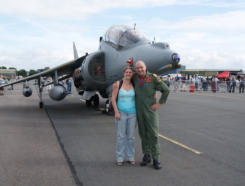 Secretary for the NHS. She enjoys skiing, spending quality time at Christmas in a tranquil lodge in Wales and has a passion for real ale being a member of CAMRA.

Although having no formal engineering qualifications she has already learnt many skills including use of the ground power equipment, checking tyre pressures and engine fire cover on start up. She has said that each 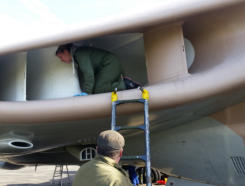 week she learns something new from other members of the crew and that even being the only female member of the Victor crew has not stopped her doing any of the jobs that need doing. It also provides her with 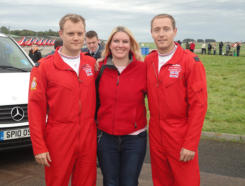 the opportunity to not only work with other like- minded enthusiasts but to meet and work alongside, in her words “genuinely nice people, true gentlemen who have served their country and are well respected”. She continues to learn each week and feels proud and privileged to work alongside all of the Victor crew as they are a fantastic bunch.