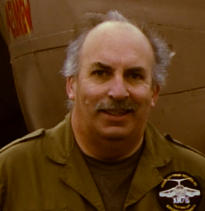 From early childhood, David has always had an interest in aircraft and fondly remembers going to many air shows as a child, from the small shows at Halfpenny Green to Little Rissington and Farnborough with his late father. His interest in air shows has continued and he still tries to attend at least two, RAF Leuchars and Yeovilton Air Day, most years. When 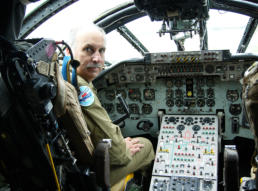 David left school, he attended college and studied to be a qualified motor vehicle engineer. Most of his career has involved transport of one shape or other, from managing a fleet of narrow boats to being a Quality Manager for National Express Coach Operations. Now currently employed as a Transport Manager and no longer working weekends, it has enabled him to be able to spend his free time on his main passion of aviation. He has been to a number of open days at Bruntingthorpe over the years with his wife Amanda who is also a keen volunteer and a member of

the Victor crew. It was at one such open day last year that having heard it announced that they were looking for volunteers, he decided to give it a try. He remembers turning up one very cold winter Sunday morning to volunteer and has not looked back. He is using old skills and learning new ones from other team members. He pays high regard to the experience and skills he is learning from Brendon, 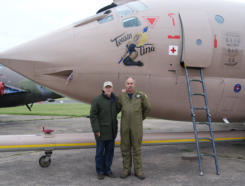 Frank and Terry especially. He said that he looks forward to each visit to the airfield as it enables him to learn more each week, from operating the ground power equipment and driving the tug to carrying out maintenance and repairs on the aircraft. It is also enjoyable to work with a team that has a passion for looking after the Cold War Jets collection. It has also given him the opportunity to meet and speak to some fascinating and interesting people from the 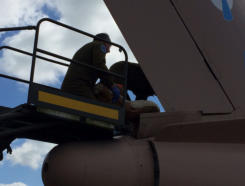 world of aviation, not only our aircrew but also people like former SR 71 Blackbird pilot Colonel Rich Graham (pictured), who visited the museum recently. He states that he has now achieved two lifelong goals relating to his two favourite aircraft; going for a fast taxi in a lightning, T5 XS458, a couple of years ago and working with a dedicated team to look after Victor XM715. His hobbies include skiing and visiting Austria but his main passion is aircraft which he feels very lucky that he can share this hobby with his wife Amanda.