Mike joined the RAF from 6th form in December 1962 as a direct entrant AEO. After graduation from RAF Topcliffe in April 1964, his long affair with 3 different Victor 2 marques began. His first posting was to the Victor bomber wing at RAF Wittering flying the Victor 2 Blue Steel in the low level delivery

role with No 139 (Jamaica) Squadron. He joined a newly formed crew and flew with them, ate with them and slept with them (QRA) for the next 5 years. The low level flying was enjoyable – the QRA not so. Half way through Mike’s tour, fatigue concerns about the airframe reduced the amount of low level training and decreased the fun. He remained on 139(J) Squadron until its disbandment in late 1968. The highlight was being part of the squadron 3-ship flypast which opened the Commonwealth Games in Kingston, Jamaica in 1966. 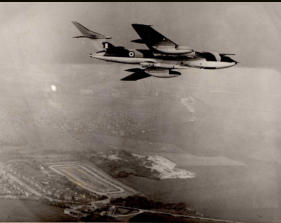 Mike was posted to No 543 Squadron at RAF Wyton recently equipped with the Victor Mk2 (SR). Life changed dramatically for the better. The variety of roles – photography by day and night, surveys for cartography, MRR, shipping support and air sampling stimulated interest. Many sorties were flown at high level – 55,000 feet over the Pacific or Atlantic Oceans out of radio contact. The suitcase was never unpacked for long. The highlights were a couple of 3-month detachments to Lima, Peru to collect samples of the French atmospheric nuclear tests. The additional equipment needed to home onto and collect the samples was controlled by the AEO. The discomfort of flying in Partial Pressure Suits and G leggings were more than compensated by the nightlife. In 1973 he was appointed AEO Leader and spent his time between Wyton and HSA Woodford offering cockpit ergonomic advice. 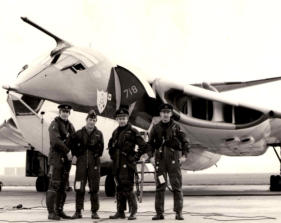 In August 1973, Mike was posted to the Course Design Team based within No 232 OCU at Marham to prepare the AEO K2 conversion course. Having written the AEO Ground School syllabus and prepared the air training exercises, he opted to be an air instructor converting on 232 OCU. He flew in each of the K2s as they arrived at Marham from Woodford for 232 OCU helping in pilot and AEO instructor conversions, then the initial crew conversions for No 55 Squadron. In 1976, Mike moved internally as the AEO Standardiser when the Victor Mk2 Standardisation Unit formed.

In 1977 he reluctantly took up the post of Victor Training Air Staff at HQ 1 Group, RAF Bawtry, before a return to the K2 on No 55 Squadron in 1982 – just in time for Operation Corporate. Mike joined Bob Tuxford’s crew training in maritime radar reconnaissance (MRR) and tactical photography deploying to Ascension Island in the first K2 wave on 18 April 1982. Thereafter life was busy – MRRs, Vulcan, Nimrod, Hercules, Harrier GR1s and Sea Harrier refuelling support. Fortunately, there was no sight of a photo sortie. Mike was awarded the Queens Commendation for Valuable Service in the Air for Black Buck 1 and 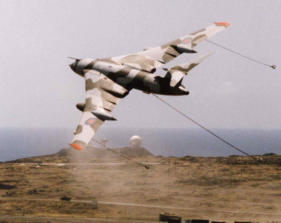 promoted to Sqn Ldr in July 1982, eventually becoming AEO Leader on 55 Squadron. He was awarded a second Queens Commendation for Valuable Service in the Air for Exercise Prairie Vortex- supporting No 617 Squadron Tornados during the 1984 SAC Bombing Competition. Mike was in the final Victor to leave Ascension Island on 10 June 1985 – some 3 years after the conflict had ended but personally flying during 10 detachments over 300 days on Hercules Air Bridge support. On leaving the tanker force in December 1985, Mike had completed over 5000 hours on the Victor Mk2. 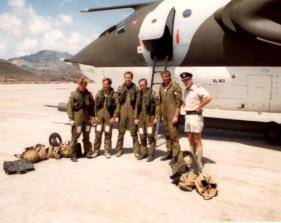 In 1985, Mike started a second career in intelligence duties. He was posted to RAF Wyton to command a unit providing briefing, tasking and debriefing support to crews of No 51 Sqn. During a six month detachment to the Gulf over Operation Granby he was awarded the MBE for his work. In 1991 Mike was posted to RAF EWOSE to command the RAF EW Database and prematurely retired from the service in 1995 to become a contractor for BAe systems in Saudi Arabia as an advisor to the Royal Saudi Air Force.