Roger was born and brought up in Birmingham 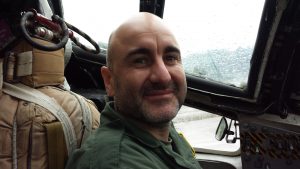 where he completed his education. Like most small boys, toy soldiers and action men attracted him stimulating an early interest in all things military. Several summer holidays were taken on the Devon Cliffs caravan park overlooking the Royal Marines firing range.

During Roger’s first year in senior school he went camping/orienteering in the Malverns and a Harrier appeared in front of the group over the top of a hill. That was the moment of realisation- aeroplanes were his favourites. He received an award after that for being Rambo of the week as it triggered something in him to want to climb trees, go down zip wires when really he’s scared of heights.

He was also interested in engineering and cars and his first jobs were associated with mechanics. He rebuilt several accident damaged cars. 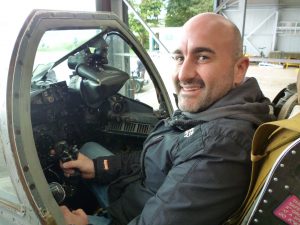 His aviation buds were rekindled when the company he worked for maintained RAF Cosford and USAF bases and he started to go to air shows. At that time he visited Bruntingthorpe for the first time.

A few years later he moved to Lutterworth and went back to Bruntingthorpe where he met Geoffrey Pool. They discussed joining Bruntingthorpe as a volunteer due to his aeroplane and engineering interest and now living so close to the museum. Roger professionally was now managing people so the Cold War Jets offered relief and the chance to get back to “hands-on” again.

He loves being part of the team, the involvement 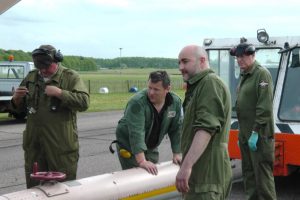 and noise of Tina and hearing the stories from people like the aged aviators up front.

Roger is a keen Aston villa fan and also interested in castles and history, He is an English heritage member.