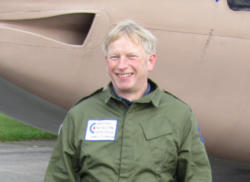 In the mid seventies Terry used to spend most weekends at Cranfield where a friend of his was studing for his PhD. Apart from the partying, he was interested in the work going on there, especially the aircraft including the TSR2. 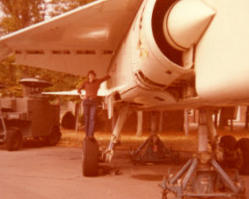 Years later Terry was present at the last air show XH558 did at Cranfield. He then followed 558 to Bruntingthorpe and was invited to be a volunteer. This included being taught the safety procedures and the fire training at Redhill London. Being amongst licensed engineers Terry was taught the procedures to help with the servicing and running of 558. These included engine runs and exercising the flying controls. He was even on-board with Barry Masefield and Dave Thomas during a high speed run. 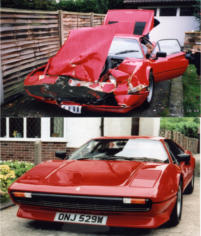 When Terry left school he worked for a vintage car coachworks company as a panel beater and auto electrician. The wiring was all colour coded and a loom would hold up to thirty wires so it was a surprise to see aircraft looms with up to three hundred wires and all of them white.

Terry took home wiring diagrams, school notes and APs for a selection of aircraft including the Victor. He read through them over and over again until he understood them.

Victor XM715 had been well cared for but over the years condensation had got into the electrics over the winters and it froze. By the time the damage was noticed due to the aircraft not accepting ground power the damage was already done.

Terry started repairs on the Victor at Bruntingthorpe but soon realised it was going to be a big job. He removed panels and components and took them home and repaired them in his spare time.

He concentrated on the show stopping problems first of all. This

process is still going on at present and now he has a good team working with him. Terry has been in charge of the Victor for approximately six years, but as a volunteer at Bruntingthorpe for twenty years.

The team now install a heater and dehumidifier over winter and remove all weather sensitive items such as alternator control boxes, station boxes,etc. Terry was on board in the AEOs position during the Cold War Jet Day at Bruntingthorpe in 2009 and was treated to an accidental flight in 715, so can claim the final flight in a Victor – or maybe not!!