Tina was carefully towed in to the Manheim Car Auction hangar at Bruntingthorpe by Dave Walton and our engineering team wing walkers on Friday 23rd March.  She had a roof over her head for one night only to form the back drop for the Vulcan to the Sky Trust’s event on the Saturday to  commemorate the last RAF flight of Vulcan XH558.  Then back out in the cold!!!  Obliging lady – anything to help with Roy as guardian!!  Lots of hard prep work and an exhausting day – but the favourable comments from the Vulcan brethren were well received.

Work is well in hand preparing Tina for the Open Day on 27th March.  Roy and Bill are washing down after the hard winter and the engineering team are well into the maintenance schedule.  The event will be centred on the south western end of the runway due to the car storage so the backdrop will be different for photographs.  Gates open at 9am and we will be with the aircraft to meet you before the fast runs start at 11am.  Our Victor memorabilia will be on sale from our tent in the concessionary area.  Hope to see you there. 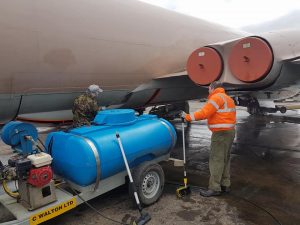 The project is still alive.  Unfortunately, the deterioration of the Ascension Island runway leading to the cessation of the Voyager staging through to Mount Pleasant has affected our timescales.  We are still awaiting the opportunity to fly the covers on the airbridge through Ascension to the Falklands and will let everyone know when achieved.  We will then be able to offer for sale first day covers signed by Martin Withers and the White 2 crew of Victor XL189 to commemorate the 35th anniversary of the Black Buck 1 mission. 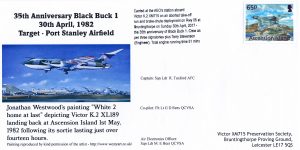 Some of the jewels of British aviation heritage will be on display and giving fast taxi demonstrations along the 2 mile runway.  The participants expected: Victor K2 XM715, 2 x Blackburn Buccaneers, English Electric Canberra WT333, Vickers VC-10K ZD241, Jet Provost, plus the Delphin.

Gates open from 9am. Tickets £15 pp at the Gatehouse on the day. Children under 12 free when accompanied by an adult bearing a valid ticket.

Reluctantly, Dave Walton has cancelled the next Cold War Jets Open Day scheduled for Sunday August 27th due to the large number of car movements at the moment on Bruntingthorpe airfield.  He will be liaising with the preservation groups and individuals to see if a few smaller activities with a few aircraft can take place which would only need smaller numbers of vehicles to be moved clear of the aircraft manoeuvring areas.  We will notify on the web of any demonstration planned by Teasin’ Tina so hope we will be seeing you all again soon. 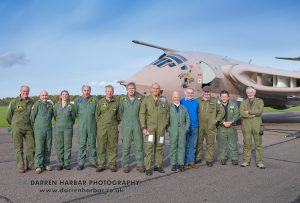 It is Open Day at the Cold War Jets Museum Bruntingthorpe on Sunday.  The demonstration running order is:

We are planning to arrange a philatelic treat to our supporters.   We recently commemorated the Black Buck 1 mission at Bruntingthorpe.  As part of this celebration we have arranged with the Adjutant of the Canberra WT333 Team to produce a series of Black Buck first day philatelic covers.

To commemorate the historic flight of Victor XL189  on Black Buck 1 we have produced 189 numbered covers to be flown on a flight from the UK to Ascension, the Falklands and return.  They will be Ascension Island postmarked over the 65p Vulcan stamp.  They will be signed by Martin Withers, who flew Vulcan 607, and the crew members of XL189, Bob, Glyn and Mike.  There are also 50 similar covers but with C-130 + Sea Harrier stamp instead  plus a few stamped with other aircraft stamps in the Ascension Island series.  All have appropriate fillers.

ALL WERE CARRIED ON BOARD TEASIN TINA XM715 ON THE AIRCRAFT RUN ON 30TH APRIL 35th.

We await the resumption of direct flights from Ascension Island to the Falklands but in the meantime if you wish to show an interest please use the our contact form and we will update you on progress.

We offer a philatelic cover stamped with GB issues cancelled by the  Birmingham Special Handstamp Centre with their Leicester permanent philatelic postmark dated 30th April. They also were on board our run on 30th April.  They will be signed and for sale.

The weather was perfect, the crowd was great and we all had a good time.  Over 140 enthusiasts and Black Buck veterans attended the event at the Whittle Building, Cold War Jets Museum.  Flypast magazine organised an excellent photo shoot catering for all photographers in front of the aircraft- we even had re-enactors complete in an immersion suit.

The run was trouble free although an unfavourable cross wind meant the run was towards the thresh hold.  The boys coped with some initial computer problems but delivered the presentation and after an excellent buffet lunch, we hope our old and new friends departed happy with their experience.  We have added a few more pennies to keep Tina on the road, so thanks to you all.  I will add a gallery of the day shortly.

Tickets to attend the event on 30th April are now available through our site.  The day will feature an aborted take off demo, photo shoot, memorabilia sales and signings, a Black Buck 1 mission briefing and the chance to meet many of the aircrew and planners involved in this extraordinary operation.

Details of the commemoration day are now on our web site.  Tickets for the event will go on sale through our website on the 6th February.