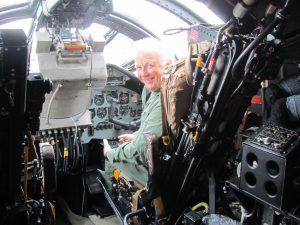 Glyn joined the RAF on a sixth form scholarship in September 1965 which provides forty hours of flying training at Cranfield. He entered RAF College Cranwell in September 1968 and, on a change of Government policy, went to Manchester University, graduating in 1972, before returning to Cranwell to finish Officer Training.

After flying training Glyn’s first tour was on No 30 Squadron flying C-130s at RAF Lyneham. He then took part in the first of many operational deployments to Belize. After a year, he

moved to No 47 Squadron. His first long haul route was to Hong Kong in February 1976 via Masirah and Colombo. A memorable exercise in 1977 involved routes to Niagara International, McClellan San Francisco, Hickam Honolulu, Nandi Fiji, Canberra and Woomera and returning the same route. And the trip was repeated in 1978!!

In September 1980, Glyn was posted to No 55 Squadron on Victor K2 tankers. On April 18th 1982, crewed with Bob Tuxford and Mike Beer, he was in the first wave of tankers deployed to Ascension on Operation Corporate. The crew took part in twenty-two operational sorties including Black Buck 1 for which Glyn was awarded the Queens Commendation for Valuable Service in the Air. As with his squadron colleagues, much of the next twelve months post Corporate were spent in the South Atlantic refuelling Hercules, Harriers, Phantoms and Nimrods. There was the odd break in Bermuda, Oceana Norfolk Virginia to compensate for the routine refuelling support over the North Sea.

Glyn was awarded his captaincy on No 55 Squadron In March 1984 returning to Ascension Island on airbridge support 7 months later. The detachments to the South Atlantic continued until April 1985. He flew his last flight in XM715 on January 31st 1986 and his last K2 flight on March 20th 1986.

RAF Brize Norton flying the TriStar 500 and guess where the first route was, yes, Brize to Ascension. He landed in the Falklands at Mount Pleasant on September 13th 1986, four years and five months after being 200 miles north with a Vulcan bomber in tow. The memorable trip was in October 1988 on Exercise Golden Eagle to Sydney via Bahrain, Paya Labar and Darwin and then back via Pago Pago, Hickham, Travis, Harrisburg and Goose Bay.

In July 1989 after graduating as a QFI from CFS, Glynn instructed at RNEFTS and Oxford UAS until April 1993. From 1993 until 1997 Glyn was AAR /AT tasking coordinator at HQ 38 Group ensuring the efficient utilisation of RAF AAR and set up the ground liaison post in Lajes to support the deployments from Europe to USA. Returning to No 216 Squadron In 1997 until October 2002 Glyn flew combat support missions for operations in Kosovo, Bosnia, Sierra Leone, Iraq and Afghanistan. There was also another trip to Sydney and Hawaii.

His final RAF tour was at the Combat Air Operation Centre 9 at RAF High Wycombe, where he became the expert AAR ground coordinator for the NATO AAR force which entailed many conferences around 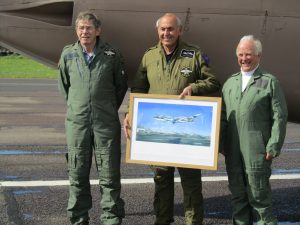 Europe and for his sins, had to deliver a lecture to the Aerial Refueling Systems Advisory Group (ARSAG) in Jacksonville Fla. It was a fitting end to 39 years in the RAF amassing 9200 hours. He joined to see the world and survived doing it. Now has rejoined his elderly crew and enjoys driving Tina around Bruntingthorpe.